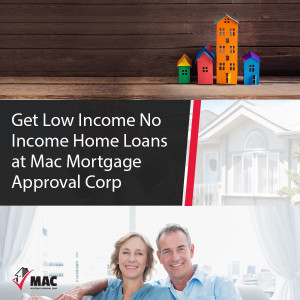 The housing crisis really changed the way banks do loans. Unfortunately, it has made it harder for individuals with low income to get a mortgage. Today, there aren’t nearly as many low income home loan options when compared with what used to be available.A number of mortgage options were put on hold while the crisis was taking place. A lot of programs were completely discontinued. While this might seem depressing, there are still many low income & no income mortgage options available.These programs can really help people who have low or no income. An excellent example is something called a stated income product. It’s a loan that doesn’t involve the lender examining the borrower’s pay stubs, tax returns or W-2 forms.

When applying for this type of loan, the borrower states their income, and the lender takes his or her word for it. In some cases, these are referred to as liar loans, but borrowers and lenders shouldn’t view these loans negatively.

Why Get Low Income No Income Home Loans?

There are several reasons why stated income loans are available. They were originally made to help self-employed borrowers. They also help borrowers who might have great difficulty proving their income.

Stated income loans are offered to individuals in a variety of situations. The credit histories of borrowers can vary wildly. An issue with a stated income loan is that it’s a prime target for fraudsters.However, it’s a unique type of loan that fills the gap of situations that traditional loans don’t apply to. Individuals who might be approved for a stated income loan are very unlikely to get approved for a traditional loan.Stated income loans are especially helpful to self-employed individuals because normal documented loans would consider their income unreliable or unstable. An example of stable income would be an investor who consistently receives capital gains.

There are several advantages of getting a low income & no income loan. In America, home ownership is frequently viewed as living the American dream. However, it can be quite difficult for many individuals to get the loan they need to purchase a home.For low income earners, there are many advantages of getting a stated income product or loan. One of the advantages is equity. A loan lets you purchase a home on your credit.Over time, the majority of homes increase in value, so you gain the potential to earn a return on every single dollar that you pay on your mortgage. Over the span of 30 years, it’s not uncommon for homes to double in value. Another advantage is the independence that such a loan can provide.

Once you own your home, you aren’t subjected to the rules of your landlord. You will still have to follow local laws, but you gain a great level of independence from owning a home. Another advantage is the increased self-esteem that comes from getting a mortgage on your first property.

This feeling will be extra strong for individuals who’re used to living in a substandard rental. Today, stated loans are making a comeback. Maybe you’ve recently lost your job and need a low income mortgage.

A low income mortgage loan can help you get through this tough time in your life. A lot of people have absolutely no income and need to get a mortgage to avoid becoming homeless.

If you have less income than what a traditional lender will want to see, then there is still hope for you to get a mortgage. You just have to know where to get it from. Stated income products are alive and well. If you’re looking for stated income loans, we can help.